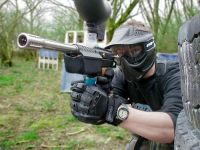 Paintball is a game in which players eliminate opponents from play by hitting them with pellets containing a paint like substance (referred to as a "paintball") usually shot from a carbon dioxide or compressed-gas powered paintball gun (or marker).
A game of paintball usually involves two opposing teams seeking to eliminate all of the other team's players or to complete some other objective, such as retrieving a flag, eliminating a specific player, or other paintball variations. Depending on the style of paintball played, a paintball game can last from seconds to days.